After he gave the police a bizarre reason, he got hauled off to the police station.

Kyōto, the ancient capital of Japan for centuries starting in the 700s A.D. and continuing through the Japanese feudal period, contains numerous famous temples such as Kinkakuji (The Golden Pavillion), Ginkakuji, Kiyomizudera, castles such as Nijō Castle, and even the headquarters of Nintendo. It has lots of beautiful gardens, as well. Even now, with Tokyo as the capital, it is often considered the cultural capital of Japan. Too many artists to list have been inspired to paint paintings based on what can be found in Kyōto, and the city has also inspired writers to write poetry with its pretty scenery. 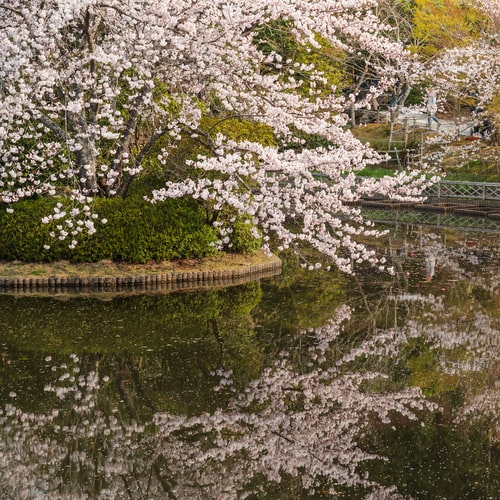 On November 25, though, one wannabe writer took his inspiration to the extreme. He not only drew inspiration from the UNESCO World Heritage site and 569-year-old Zen Buddhist temple, Ryōanji, but was inspired to use it as one part of his “art.” Tatsuya Onishi was at Ryōanji Temple, and he decided to scribble some graffiti on the backside of Ryōanji’s main gate. He took out his three-colored pen, and scratched the following: 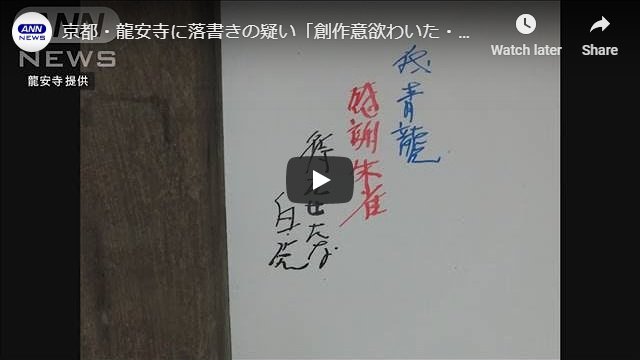 “I am Seiryū
Thank you, Suzaku
I kept you waiting
Byakko”

Are these the names of Onishi’s ex-lovers, or perhaps some kind of yakuza-related jargon? No—they’re gods from Chinese folklore, which were then imported into Japan, Korea, and other East Asian countries). Seiryū is the Azure Dragon, who lives in a palace on the ocean floor. Suzaku is the Vermillion Bird of fire; Byakko is the white tiger. Trivia: Byakko-tai, or White Tiger Brigade, was the name of a brigade of approximately 20 military cadets who committed seppuku during the Boshin War when they erroneously thought Aizu Castle was on fire—only one of them survived, and no, the castle was actually not on fire. Anyhow, to to digress, Onishi made sure to match the colors in his tri-color pen to correspond to the color of the god—blue for Seiryū, red for Suzaku, and black for Byakko (because, in case you’ve never tried it, writing in white on a white wall doesn’t show up very well).

The color scheme he used was quite logical. Unfortunately for both the UNESCO World Heritage site and Onishi, his decision to write this “poem” on Ryōanji was not particularly logical. It got him arrested. Even more illogically, he was doing this in the middle of the day, 3:40 PM. The police were called when a tourist at Ryōanji discovered him doing it. The police came and arrested him, then questioned him. It turns out that Onishi is 44 years old and comes from Yokohama. He explained:

“In the future, I want to become a writer of legends and science fiction stories. My creative juices overflowed, and so I wrote on the gate.”

Fair enough. At least he wasn’t marking territory for Yamaguchi-Gumi or Yamaken-Gumi, the Crips or the Bloods, or the Mafia. At least he wasn’t taking sick, twisted pleasure in ruining Ryōanji in an act of criminal vandalism. However, his explanation just wasn’t quite good enough to get him released. The police booked him. In the mean time, the graffiti has been removed, fortunately.

The odd thing is that the words were not particularly profound, nor was his handwriting particularly beautiful. It was just doodling about a topic that most in Japan already know about (Seiryū, Suzaku, Byakko, as well as Genbu, the black turtle of the north, are well known in video games and anime). We’re skeptical about his creative abilities, and really have to wonder, was this “art” really worthy of vandalizing Ryōanji, one of Japan’s premier sightseeing spots and Buddhist temples?