Who is this “Edward Znoden?” I feel like I’ve heard that name somewhere before…

For a long time prior to becoming an informant about the US government’s shady activities, and becoming active in advocating for, and warning people about cybersecurity, Edward Snowden loved anime. One of his first jobs, before doing what he became the most famous for, was in a startup company, started by him and his friend, selling anime art. In 2018, he finally ascended to a new level: now, he doesn’t sell anime art, he is anime art! Edward Snowden, err, Edward Znoden is an anime character in Lupin III: Goodbye Partner, which is a TV special in which he made a brief appearance.

“[I]s this real?” he tweeted on Twitter, after he recently watched his brief appearance in the English dub of the TV special. 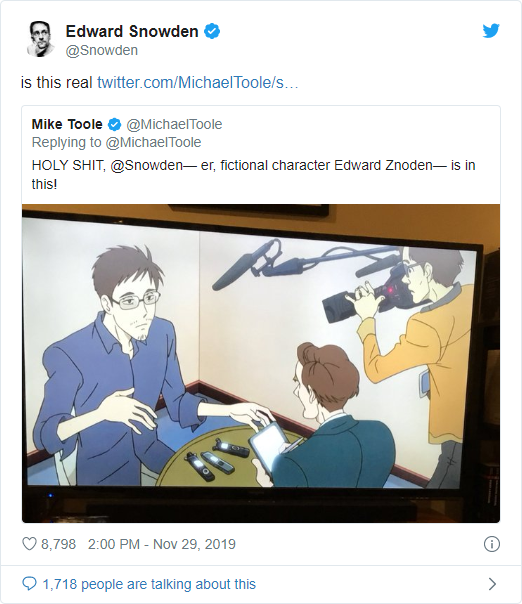 When someone told him about his brief appearance in Lupin III, he wrote on Twitter: “It’s like a lifetime achievement award. Lupin is one of my favorite series.” He joked “let us give thanks that anime is a thing now.” Please note that he posted this shortly after Thanksgiving Day in the US, which was November 28.

Before, Snowden has also referenced anime. He discussed his favorite Pokémon in a previous Tweet.

Lupin III: Goodbye Partner premiered on January 25 in Japan. It was the first “completely original” installment in the franchise in six years. It debuted at Anime NYC on November 17. It became available on Google Play, iTunes, and Amazon Digital on November 18.

In Japan, Company's New Policy Prohibits Its Workers from Licking Their Fingers Before Touching Papers, Money

Kotatsu for Cats Allows Your Pet Cats to Chill Out During the Cold Season, Like Japanese Humans Do