Now, let’s discuss a new type of Japanese real estate…a house…for hedgehogs! Hedgehogs are becoming increasingly common as pets, especially in Japan. The Japanese word for “hedgehog” is harinezumi (ハリネズミ or 針鼠, literally “needle mouse”), because their bodies are covered in sharp quills. However, when the hedgehog is calm, it’s possible to pet it; it feels like petting a hairbrush with stiff bristles. Hedgehogs love new smells, from cigarettes to turpentine, and will “anoint” themselves with a mixture of spit and the interesting new smell (acquired by rubbing against the source of it).

Well, for those who have chosen to care for one of these cute pets, the Solcion company has now created a portable “house” for it,” called the “Harinezumi Carry House.” It’s much cheaper than a human house in Japan (though those aren’t as expensive as you might think: What Real Estate Can I Buy For Under $100,000 In Japan?). The price for this house is only ¥4,900 ($44.36)! 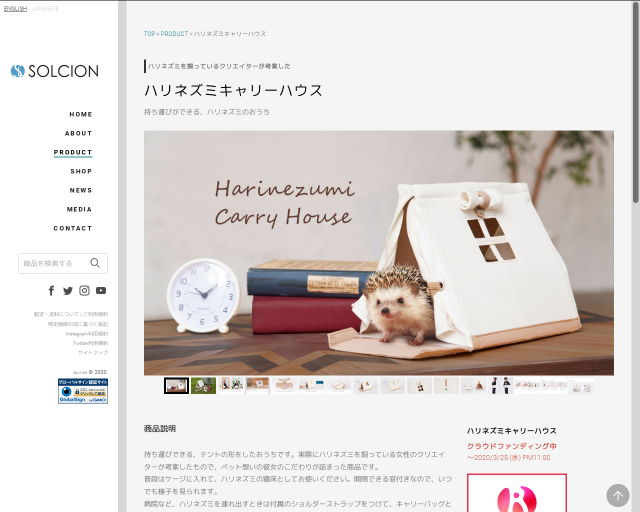 It takes the form of a shoulder bag made of canvas. It resembles a tent. The material is water repellent and harmless to your favorite hedgehog.

You can even set it up inside the hedgehog’s cage. The advantage of doing this is that it’ll be darker than the rest of the cage, which the hedgehog will appreciate, because they’re nocturnal. Some owners turn down the lights or even install red lightbulbs, because the hedgehog has sensitive eyes. There’s even a window that can be rolled up or down.

After spending all that time in the little hedgehog house, occasionally, Harinezumi-chan will have to go to the bathroom. That’s where the removable bottom plate comes in! It’s easily washable. In fact, just open some fasteners and you can open the whole house. It can be flattened into one sheet, and you can clean the whole thing easily. Just make sure Harinezumi-chan has left it…perhaps politely knock on the front door, first.

The Solcion Harinezumi Carry House was originally released on the website “Readyfor,” which is a crowdfunding site similar to Gofundme. It surpassed its goal by 404%. On March 25, they’re going to start selling the houses on their website. In the meantime, until they start doing that, you can research how to buy your own house. Then you can buy a Harinezumi Carry House, and tell your friends you own two houses in Japan… Guide To Owning Japanese Real Estate For Foreign Investors

A Good Time To Buy Japanese Real Estate? Dollar/Yen Exchange Rate, 112 Yen To The Dollar In No Time! "Yen Depreciation" Goes On And On

How Much, On Average, Did Japanese Tenants Pay For Key Money In 2019?