Yamato, the company that produces “Arabic Yamato,” a type of liquid glue, has warned its customers not to eat, drink, or otherwise ingest its glue. “Arabic Yamato” is ubiquitous in Japan and can be found in many ¥100 shops, stationery stores, convenience stores, and supermarkets. It’s like Japan’s version of Elmer’s Glue. 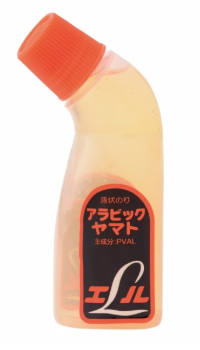 Why are people ingesting this type of glue? Is it to achieve some sort of “high?” Nope.

The reason is that some think it’s a type of medicine which can either prevent or fight cancer. This is in response to a scientific discovery made recently. Tokyo Institute of Technology did a clinical study and found that the chemical PVA (polyvinyl alcohol) can be used in combination with an anti-cancer drug called “BNCT” to fight cancer. BNCT, which is used in radiotherapy, includes a strong anti-cancer chemical called “p-boronophenylalanine.” Basically, BNCT itself is the anti-cancer drug; PVA helps it do its job by allowing it to stay in cancerous cells longer. Just as Yamato Arabic glue can glue one piece of paper to another, PVA can “glue” BNCT to a cancerous cell for a longer period of time, increasing its effectiveness. However, without BNCT, PVA is utterly useless. In addition to Yamato Arabic glue, eyedrops and some other household substances also include PVA. However, ingesting any of these substances is useless at best and harmful at worst.

The media reported on the effectiveness of PVA in augmenting BNCT, and pointed out which household substances contained PVA. This possibly led some people to believe that substances with PVA in them are “good for you.” Here were some reactions from netizens:
“How did they think to put glue on a cancer cell? Amazing.”
“I just ate some.”
“I’m going to take a bath in glue now.”
“I used to love putting this stuff on my hand and peeling it off.”
“So if I drink glue every day, can I stay healthy?”
“Well, if that’s the case, I’m using Arabic Yamato from now on since it’s pharmaceutical.”
“Why did I use a glue stick so much growing up?”
“Wow. Glue can even fix people’s lives.”

Yamato released a statement. It read:
“As for us, just as we were when this topic was popular last May, we are very surprised to learn that the main component of liquid glue, PVA, has such potential in the medical field. We are very happy about this bright news.

However, as for our products, please do not use them for anything other than their intended purpose for normal consumers.

Thank you for your continued support of our various adhesive products including Arabic Yamato which has been loved since its release in 1975.”

What On Earth Is This Animal, And Where In Japan Can I Play With One?