When considering the problem of housing in the future, it is essential to know the current state of declining birth rates and the surging aging population. How is the Japanese population actually keeping up with the transition?

The total population peaked at 120.806 million in 2010 and has been gradually declining. Although the overall number is decreasing, the wider age group is composed of people of 75 years old or older, while the working-age population (15 ~ 64 years old) is decreasing (from the Ministry of Internal Affairs and Communications “Census”). 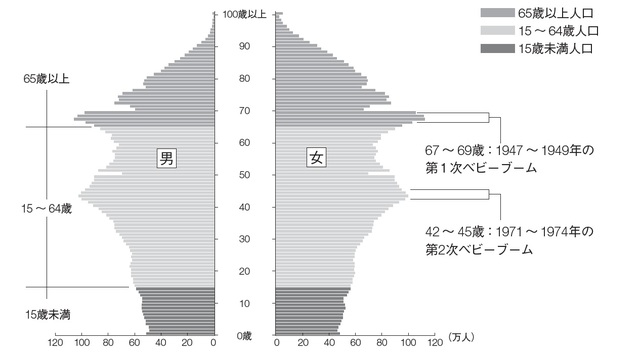 When you look at the graph of the “population pyramid”, where the vertical axis is the age, there are two relevant bulges. One is the layer of “baby boom generation” born in 1947-1949, and the other is the layer of baby boom juniors who are their children. When considering the transition of the population, the generation of the baby boomers who supported the post-war period became the elderly group at a later age and in 2025, all the layers indicating baby boom juniors will reach their 50’s, significantly impacting the social structure.

Moreover, speaking of the relationship between population and housing, single-person households, households with only couples, and single-parent and child households are on the rise, but the number of people per household and the number of households themselves are expected to decrease gradually.  There is however a slight difference between the metropolitan area and the region (the difference between the city and the region is mentioned in the book “The 50 conditions necessary for future apartments”).

The increase in single-person households, accounting for a third of the total, has also been pointed out in recent tax surveys. The families of large families with many generations living together, which were often seen before, have fallen sharply, and it can be said that the shape of Japanese families is also changing.

If the structure of the family changes, the homes that are required will consequently change as well. In retrospect, aiming for expansion and growth was one of the virtues in the postwar high economic landscape.

The young generation aims at a high income and stable life, moving to a city with the goal of attending “a good university” and joining a “good company” in mind, and live in their own home without returning to their parents’ residence. Parents who are left behind will remain as a household of a couple, as it is difficult for them to leave a home that they are attached to, although a lot of people also choose to become single-person households by not wanting to become a burden to their children. However, in reality, a senior citizen might not be able to manage a large house that once was lived by a family and they might not even not what to do with it.

The sense of values ​​has changed, and the form of residence has also changed

In the past, “building your house independently” or “living up in the hills of the suburbs” were considered one of the achievements in life. Of course, it is still one of the housing options, but since the bubble era and the subsequent Lehman shock, diversification of values ​​has progressed, and everyone is less likely to pursue the same goal.

It would be unrealistic to have your own home without hesitation if, in the midst of a downturn in the economy, you are affected by the downsizing or are in a state of temporary employment. In addition, the marriage age of both men and women has increased, a declining birthrate has progressed, and the rate of unmarried life has also risen.

If the perception of values ​​changes, so does the housing. The tendency of living close to work has become higher, more people are emphasizing convenience and think “I want to live in a place with transportation” rather than having a large house in the suburbs. It is no longer an age where people share the same ideals and dreams.

It is also said that young people who did not know the bubble era, do not crave a life beyond their reach. If you live in an urban area, you can live without having a car, and it is known that we tend to prioritize what is “real” over the appearances and aspirations, for instance, choosing a share house for your rent.

This way, as the social structure and people’s thoughts are changing, the housing prospect is changing, and as a result, “vacant house” has also become a problem that is increasing throughout Japan.

A growing number of vacant houses and apartments in decay

Even though the number of households is increasing in statistics, Japan’s population is steadily decreasing. On the other hand, you may often see single-family homes and condominiums being built where there still is available space. If new construction continues in addition to the existing housing market, it is natural for the number of vacant houses to increase. These unoccupied housing issues began to draw much attention in the 2014 Survey on Housing and Land Statistics. 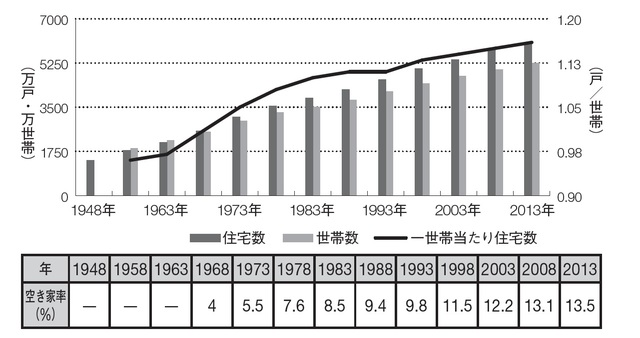 Even if you look at the transition of vacant houses in recent years, it has been rising steadily, and it is estimated that the day when the number will exceed 10 million units will be close. The problem of vacant houses involves various factors that can not be solved only through statistics.

After the war, Japan started from a state of housing shortage of 4.2 million units, and the government actively supported the construction of housing as a national policy. With the aim of “one house per one household” and “one person, one room”, the construction of houses was actively promoted and in a 1973 survey, the quantitative shortage had been resolved at the national level.

Since then, there have been issues concerning land prices dropping after the bursting of the bubble, but at the same time, construction of new housing has continued and the problem of vacant houses has become serious.

In brief, there is also a separate kind of vacant house. According to a survey by the Ministry of Internal Affairs and Communications, the term is divided into those that are temporarily vacant for “rental and for sale”, “secondary houses” such as villas, and “others” that are instead vacant for a long time. Although rental properties have a period of time in which they become vacant houses / vacant units (vacant rooms) by nature, the number for the “others” category has been increasing in recent years, accounting for 38.8% of the total.

The reason why empty houses are not good is that, if you lose the resident, they will soon start to age in various places, making the roof or damaged walls easy to collapse. In case of a fire, there is the danger that it will spread in an instant.

There are many old buildings that do not meet the current earthquake resistance standards, including RC apartment buildings or those that have not even been subjected to seismic reinforcement work, and if there is a major earthquake, there will be no resistance at all. Other than that, there are other aspects such as suspicious people entering a vacant property and making it a breeding ground for crime, deteriorating hygiene and landscape damage.

In the case of rental apartments, there are also problems unique to shared housing. Residents who place importance on living conditions and can afford to pay a certain amount of rent usually have a reasonable social status. These apartments are constantly maintained, and the apartments themselves are maintained beautifully and do not become slums.

However, if the landlord does not refuse a potential tenant who wants to “secure the rent because it is cheap” based on the fact that he prioritizes paying the loan back, the property cannot be maintained adequately in terms of both economics, safety, and morals, resulting in a degrading apartment. From there this leads to a vicious circle of stagnation.

As additional reasons for the increasing number of vacant houses in one-person households, there is a chance that the owner who lived alone passed away or moved to a nursing home, etc.  and even if you want to demolish the house, it may take several million yen just for dismantling costs, and you may not be able to find the funds to.

Furthermore, you may think that it is better to leave the house unoccupied because of tax issues. In small residential land, in fact, property tax will be reduced to 1/6 if there is a building on the land, but this benefit will not be applied if it is empty land.

Also, you may not be able to build a new building in an empty lot. For instance, according to the current Building Standard Law, constructions cannot take place unless the area is facing public roads with a certain width and other specifications. Therefore, if you do not meet the conditions, the choice will probably tend towards not demolishing at all.

Many of the issues related to these unoccupied houses have so far occurred in local governments where population decline is significant. Today, however, population decline is beginning to take place in the suburbs of the metropolitan area, where this should not have been so remarkable. Even if there is a demand for housing in the metropolitan area, there may be more vacant homes due to the tendency to move toward the central part and troubles of succession, etc., therefore, this does not mean that it should be better to just leave it as it is.

In order to cope with this problem, the government enacted the Act on Special Measures against Unoccupied Homes in November 2014, and in addition to the guidance and recommendations to promote appropriate management of “Specified Unoccupied Homes”, promote the use of the ruins, enabling also administrative commissions. If you do not follow the advice, the local government may be forced to demolish the property and charge the owner for the dismantling costs.

Furthermore, the problem of the vacant houses often includes the concern of arranging the items left by the deceased and the problem of garbage. A variety of initiatives are currently underway, such as NPOs that provide management and advice in these regards, as well as vacant house banks.

The circumstances leading to an unoccupied house and its status also vary. It may be necessary to change your mindset to use it as a type of stock housing – a property sold for sale in an existing building, that is, a used property. The complication of vacant houses is the result of various issues that Japan has today.

From original Japanese article by Kumazawa Shigeki and Yasui Hideo.

The impact of technology on the Real Estate industry